Department of Traumatology and Orthopedics

Department of Traumatology and Orthopedics

Department of Traumatology and Orthopedics of the Belarusian State Institute of Advanced Medical Training was founded in October, 1953, as a part of USSR medical services rendered to patients with disorders and diseases of musculoskeletal system, training of highly qualified specialists and development of scientific researches in the field of traumatology and orthopedics.

Within 25 years the Department had been headed by V.O.Marks, Doctor of Medical Sciences, Honored Scientist of BSSR, who was invited from Kharkov Scientific and Research Institute of Traumatology and Orthopedics. V.O.Marks derived progressive and actual approaches and ideas of that time. So he started to implement progressive functional treatment of bone fractures and orthopedic diseases into practice in Belarus.

The issues of intra-articular injuries and diseases and hip congenital dislocation were of great attention at the Department. V.O.Marks offered and implemented the method of diagnostics and treatment of congenital dislocation of the hip in newborns into the practice, developed clinical diagnostics of dislocated fractures of elbow joint, studied mechanical origin, clinics and diagnostics of vessel and nervous complications at fractures, he offered some diagnostic maneuvers, which came into the world and national medical science as "Marks symptom", "Marks bow". His monograph "Orthopedic patient work-up", published in 1956, was taken as the main educational guidance in all educational establishments of higher medical education of the former USSR. The monograph "Healing of bone closed fracture" (1962) played a very important role. The book "Orthopedic diagnostics" (1978) contributed greatly into science, which is considered to be the best one among national guidances on orthopedics and traumatology.

Under the supervision of V.O. Marks more than 1000 traumatologists, a lot of clinical residents had been prepared.

Works written by A.V.Rutsky are of great importance for medical science and healthcare practice. They cover the issues of operative treatment of musculoskeletal system injuries of different localizations. In his works A.V.Rutsky offered the following: methods of three-flange nailing at subcapital fractures, treatment of comminuted fractures of spoke bone distal direction, bone autoplasty at medial fractures of femoral neck. His researches on peculiarities of severe and complicated fractures contributed greatly to the medical science. They helped to improve the results of treatment of elbow area fractures in children. In 1975 Doctoral thesis on this issue was protected.

Having a longstanding clinical experience and excellent skills in rendering medical care while treating fractures, in 1970 A.V.Rutsky published a monograph - "Prolonged tractions in traumatology and orthopedics", and the monograph "Injuries of magistral blood vessels" (1985), which has been actual until the present time. A.V.Rutsky is a co-author of the following books: "Teratology of Man" (1979,1991), "Pediatric Neurology" (1990), "Neuro-orthopedic and orthopedic-neurological syndromes in children and teenagers" (1998), "Encyclopedia for pediatric neurologists" (1993).

In 1987 A.V.Rutsky together with A.N.Mikhailov published "X-ray Diagnostic Atlas" in 2 volumes, which filled an essential gap in national medicine literature. It gained general recognition and huge public attention.

Under the supervision of A.V.Rutsky an original hip joint endoprothesis had been worked out and had been created, which got the Certificate of European Standards. Mass production of it had been set.

Other actual fields of traumatology and orthopedics have been being developed. The following Candidate's theses have been protected: "Comparative evaluation of primary autoplasty and suture of finger flexor chorda in "critical area" (1987) by A.A.Lerner; "Injuries of knee joint meniscus (arthroscopic diagnostics and risk factors of pathology changes)" (1999) by A.P.Maslov; "New technologies in the treatment of traumatic defects of soft tissues with the usage of drug dosage forms on the basis of hydrogel" (2008) by A.N.Benko. The following Doctoral theses have been protected: "Organizational and tactical aspects of microsurgery replantation of joints and their segments" (1997) by V.N.Podgaisky, "Diabetic foot (pathogenesis, clinics and treatment)" (199 9) by N.N.Tchur.

In the 80th-90th-s, based on the research findings, totally 18 Doctoral and Candidate's theses had been protected, 420 scientific works had been published, including 12 monographs, 10 invention patents had been received.

Both treatment and pedagogical activities have been an important part of the Department's work.

The first clinical base was Surgery Division at Minsk railway Hospital. In 1954 at Minsk Regional Clinical Hospital there were 4 patient's rooms (30 beds) belonged to the department, in 1955 the department had an autonomous Traumatology Division on the same base.

From 1958 to 1961 A.V.Rutsky was head and a teacher at the department, Y.F.Fraifeld worked as an Associate Professor, I.P.Pesliak worked as an assistant. Hereafter, the Division was expanded to 60 beds, and since 1971 the department had moved to the Republican Clinical Hospital, to Orthopedic and Traumatology Division of adults and children, situated in Lesnoy village. In 2 years the third Division for recovering trauma patients (60 beds) was opened, which in 1985 was converted into the Division of Complicated Trauma. Today treatment and academic activities have been carrying out on the bases of these divisions.

In 2013 the department had its 60th Anniversary.

Main fields of the clinical work are the following ones:

Correcting pelvis osteotomies and osteotomies of cephalic end of hip in patients with dysplastic coxarthrosis, avascular necrosis of head of femur are widely carried out.

These operations are considered to be organ-preserving ones, which help to stop arthrosis progression and avoid joint endoprosthesis.

Based on the research findings, totally, in the 80-90s, 18 Doctoral and Candidate's theses were protected, 420 scientific works were published, including 12 monographs, 10 invention patents were received.

Clinical and pedagogical works are of great importance at the Department.

Since the time of the department's existence many physicians have undergone training there: more than 5000 physicians, about 120 clinical residents, who work as head of divisions, traumatologists. The department prepares specialists in the field of traumatology and orthopedics from foreign countries - Iran, Morocco, Syria, the Republic of Yemen, Lebanon etc.

Clinical base of the department is Minsk Regional Clinical Hospital. The clinics of traumatology and orthopedics of BelMAPO is situated on the basis of three departments: 1 and 2 orthopedic and traumatology divisions of complicated trauma for 160 beds. The clinic is equipped with modern devices.

The department has a special classroom for practical classes on new technologies of endoprothesis and osteosynthesis. Master-classes are run on artificial bones.

Main forms of classes: practical classes, lectures, seminars. The department has a special classroom for osteosynthesis, endoprosthesis, arthroscopy, where learners master new methods of operative treatment of musculoskeletal system pathology. The learners study from rounds, clinical discussions, consultations. A special attention is paid to minimally invasive methods of osteosynthesis during the classes in the operating room.

Staff of the department carries out follows-up of patients, consultations in outpatient clinic, planned and emergency call-outs to district centers of Minsk region.

Teaching staff of the department carries out consultations at Professor's State Medical Advisory Centre of BelMAPO.

Within the last 5 years specialists of the department have undergone training on the basis of orthopedic clinics in Frankfurt on the Main (Germany), Clinic named after V.Degi (Poznan, Poland), Clinic of Paracelsus (Salzburg, Austria).

In the frameworks of international project LinkAdemy  specialists of the department (associate professor A.N. Benko) were invited as surgeon-instructors to show master-classes and present the surgeon's show case on the primary, revisory and  unicondylar endoprothesis of knee joint at university clinics of Bucharest (Romania ), Sofia (Bulgaria), Budapest (Hungary). 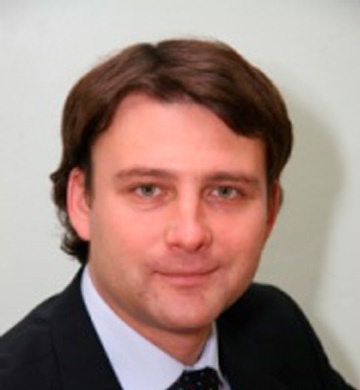 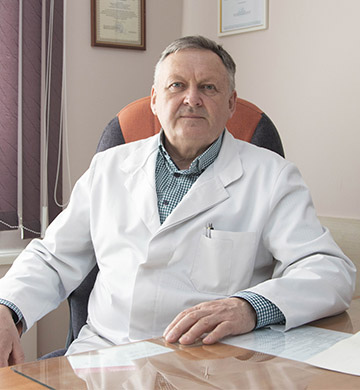 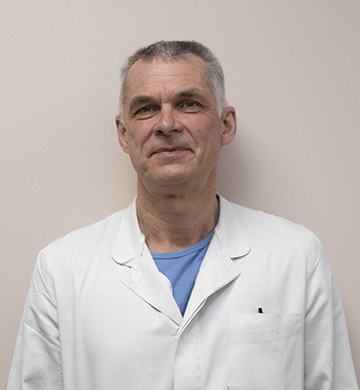 Vladislav Yarmolovich
Associate professor of the Department of Orthopedics and Traumatology of BelMAPE, Candidate of Medical Sciences, traumatologist of the highest qualification category
Our website uses anonymous data transmitted using cookies. 🍪 All your information is stored securely and is not shared with the third parties.