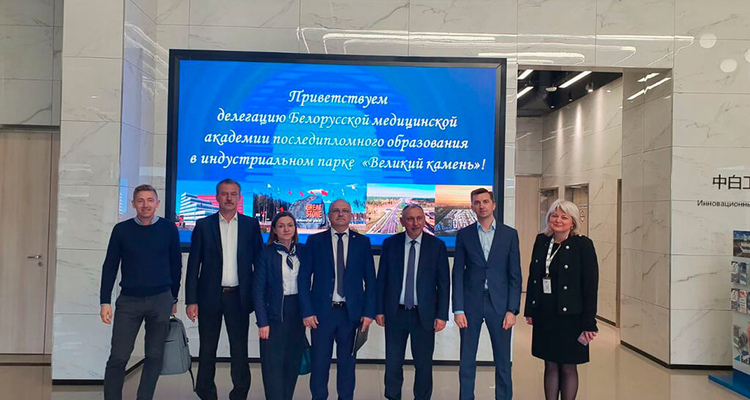 On the 22nd of June 2022, the administration and specialists of BelMAPE visited the Industrial Park «Great Stone». The delegation got acquainted with the structure, aims and tasks of the Industrial Park, as well as with the preferences provided in it for the commercialization of scientific developments.

Rector of BelMAPE Alexei Chukanov, dean of the Faculty of Public Health and Healthcare Irina Tikhonenko, specialists of the Department of Financial Management and Informatization of Healthcare Alexander Stefanin and Yuri Mescheryakov participated in the negotiations. On behalf of the administration of the Industrial Park, head of the park administration Alexander Yaroshenko, Deputy Head of the Administration Tatyana Cherkasova, First Deputy General Director of CZAO Industrial Park Development Company Kirill Koroteev, head of Investment Promotion Department Sergey Bubenko.

During the negotiations, there had been discussed the issues of the development of Traditional Chinese Medicine in our Republic as the stage in the implementation of the tasks set by the Ministry of Health of the Republic of Belarus, as well as broad opportunities of the participation of BelMAPE.

In addition, BelMAPE, as a leading scientific organization, was presented the ideas of using artificial neural networks to support clinical decision-making and the prospects for introducing such developments in the healthcare of the Republic; the existing developments in the field of prenatal diagnosis and early diagnosis of breast pathology using machine learning algorithms were presented.

Forms and ways of mutual cooperation were outlined and points of interaction in the field of digitalization of medicine were identified.

15 Jun 22
Our website uses anonymous data transmitted using cookies. 🍪 All your information is stored securely and is not shared with the third parties.