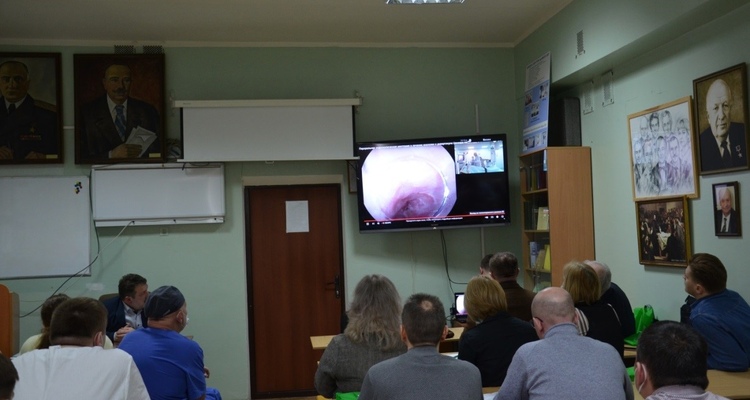 On the 8th of April 2022, there had been held the Republican seminar with international participation and online broadcasting from the operating room “Peroral endoscopic myotomy in the treatment of achalasia and Zenker's diverticulum of the esophagus”.

The seminar was opened by Alexander Linkevich, chief physician of Minsk Regional Clinical Hospital, who stressed upon the importance of holding such events for practical healthcare. 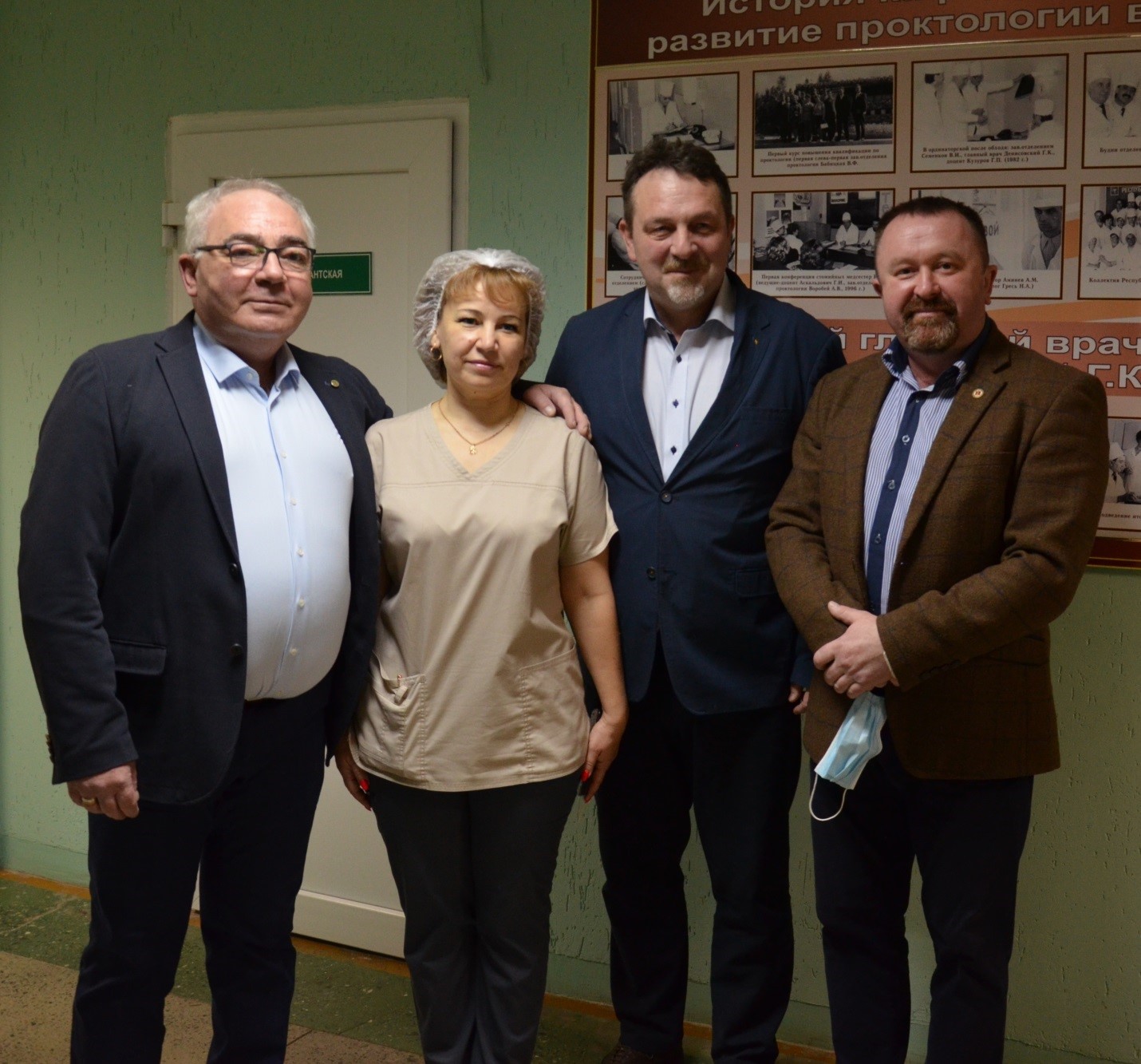 The head of the Department of Surgery of the BelMAPE, Doctor of Medical Sciences, professor, Corresponding Member of the National Academy of Sciences of Belarus Alexander Vorobey addressed the audience with a welcome speech and emphasized the relevance and necessity of holding such events, which will allow doctors to become more familiar with new modern achievements in endoscopy and will contribute to their implementation into practical healthcare.

The seminar was attended by endoscopists and surgeons from Minsk and all regions of the Republic of Belarus.

The event was dedicated to the modern endoscopic method for the treatment of neuromuscular diseases of the esophagus, in particular achalasia and Zenker's diverticulum, using oral endoscopic myotomy. Previously, such operations were not performed in Belarus.
During the seminar, there was a broadcast from the operating room. 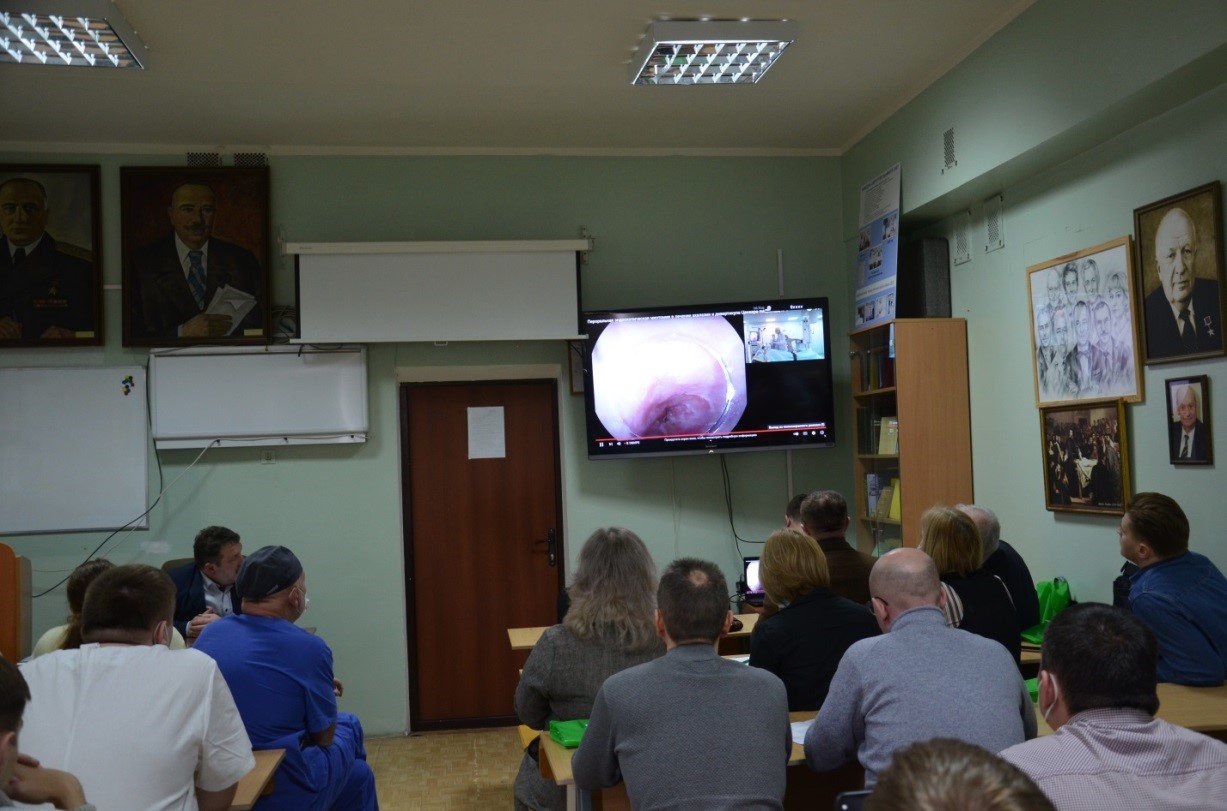 The master class was held by Doctor of Medical Sciences, professor Shishin Kirill, head of the Department of Endoscopy of State Budgetary Institution of Healthcare "Moscow Clinical Scientific and Practical Center named after A. S. Loginov" of the Moscow Department of Health.

Speakers made presentations between broadcasts.

Rok Akram, a gastroenterologist of Minsk Scientific and Practical Center for Surgery, Transplantology and Hematology, in his report "The Role of High-Resolution Manometry in the Diagnosis of Esophageal Achalasia", considered the issues of diagnosing esophageal achalasia using high-resolution manometry, pointing out the importance of conducting it before surgical intervention to determine the type of esophageal achalasia.

Shishin Kirill presented the report "Modern approaches to the diagnostics and treatment of neuromuscular diseases of the esophagus", in which he shared his and the world experience in performing endoscopic myotomy, the details of its performance that were not reflected during the broadcast from the operating room. He also noted the importance of the correct choice and understanding of the operation of the electrosurgical unit when performing endoscopic operations.

The participants of the seminar noted a good organization of the event and expressed their wish for further holding of such thematic seminars, which can become a kind of platform for establishing information exchange between the scientific and practical medical community, and can also contribute to the development of international cooperation.

You can get acquainted with the demonstrations of clinical cases from the operating room at the link, which will be available until 05/08/2022.

Participation of BelMAPE at the Second Republican Forum «World is in Woman’s Hands!»

Republican seminar on the issues of management and care over women of reproductive age, pregnant and women in childbirth who underwent COVID-19 in outpatient clinics

08 Apr 22
Our website uses anonymous data transmitted using cookies. 🍪 All your information is stored securely and is not shared with the third parties.