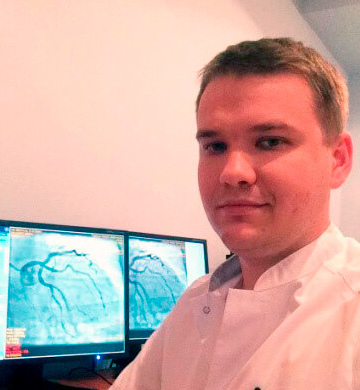 Senior lecturer of the department

Senior lecturer of the department

Aleksandr Astreiko was born on the 21st of December, 1988 in Smorgon, Grodno region.

In 2012 he graduated from Belarusian State Medical Institute, with the specialty General Medicine.

In 2016 he got the primary specialization in Roentgen-Endovascular Surgery, practicing at the Republican Scientific and Practical Center for Cardiology.

Since 2017 he has been working as a roentgen-endovascular surgeon at the room for angiography №1 at Minsk City Hospital № 2.

Since 2017 he has been undergoing training at clinical residency at the Department of Cardiology and Rheumatology of BelMAPE on the specialty” Cardiology”.

His main scientific interests are the following:

Last edit 2020-12-07 12:23:22
Our website uses anonymous data transmitted using cookies. 🍪 All your information is stored securely and is not shared with the third parties.