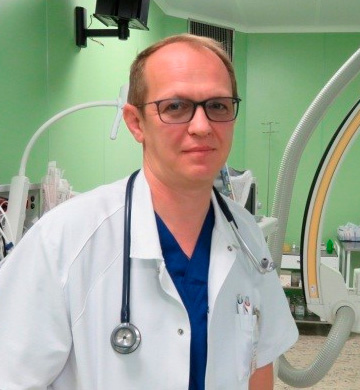 Aleksandr Beimanov was born in Pinsk, Brest region, in 1968. He spent his childhood in Mogilev, where he finished secondary school.

After his graduation from Grodno State Medical Institute in 1993, he started his clinical practice as a surgeon resident in Gomel.

From 1994 to 1996 he underwent clinical residency program at the Republican Scientific and Practical Center for Cardiology in Minsk on the specialty «cardiovascular surgery».

In 1996 Aleksandr Beimanov continued his career as a cardiosurgeon at Gomel Regional Cardiology Dispensary.

From 1996 to 1997 he had a traineeship at the Republican Scientific and Practical Center for Cardiology on the specialty «cardiovascular surgery», «X-ray methods of diagnostics and treatment of cardiovascular diseases».

From 1997 to 1998 Aleksandr Beimanov had a one-year course in Italy, the project titled «Mater of cardiology, cardioanesthesiology, cardiosurgery» in Pisa, Bergamo and Massa-Carrara. In Italy he was involved into the research work on the problems of endovascular treatment of venous grafts in patents after coronary artery bypass surgery. Most of the time in Italy he took training at the Clinic of Physiology in Pisa, at the Unit of Interventional Cardiology.

From 1998 to 1999 Aleksandr Beimanov worked as a cardiovascular surgeon at Gomel Regional Cardiology Dispensary.

In 1999 he was invited to work at Minsk Clinical Hospital № 4 as a roentgen-endovascular surgeon.

From 2001 to 2009 he worked at the Republican Scientific and Practical Center for Cardiology as a roentgen-endovascular surgeon.

Since 2009 until the present Aleksandr Beimanov has been working as head of Roentgen Surgery Unit, room for angiography at Minsk Clinical Hospital for Emergency Medical Care. Within the period of his work he did traineeships and training courses at leading clinics of Europe, USA and Canada.

His main scientific interests include the following:

Aleksandr Beimanov was among the first in the Republic of Belarus to apply modern endovascular technologies in the treatment of acute myocardial infarction according to the world’s standards.

Aleksandr Beimanov was the first one in Belarus who started to apply assisted circulation (balloon pump) during endovascular treatment of acute myocardial infarction at cardiogenic shock.

Aleksandr Beimanov was the first one in Belarus who started to apply additional techniques on evaluation of coronary and peripheral blood circulation, using the methods of ultrasound intravascular visualization and determination of arteriovenous pressure, coronary flow reserve.

For the first time in Belarus, Aleksandr Beimanov, together with vascular surgeons, performed an operation on stenting of renal arteries at vasorenal hypertension.

For the first time in Belarus, Aleksandr Beimanov performed an operation on endovascular treatment of acute ischemic stroke – thrombextraction from the brain vessels, with superselective thrombolysis.

The methods mentioned above have been implemented to the practical healthcare of the Republic of Belarus.

Aleksandr Beimanov was awarded honorary certificates from the authorities, the Health Committee of the Minsk City, Minsk City Executive Committee, Ministry of Internal Affairs of the Republic of Belarus, public organizations.

In 2009 he was awarded the bronze statue «Per superandum ad viktoriam» in the nomination «Vopyt i Stalast» at the annual conference with international participation «Actual issues of cardiosurgery in Vitebsk.

In 2011 he was awarded the bronze statue «A heart on the hand», for his contribution to the development of cardiosurgery and roentgen-endovascular surgery in the frameworks of annual conference with international participation «Actual issues of cardiosurgery» in Mogilev.

Aleksandr Beimanov was a winner in the competition «Doctor of the Year in the Republic of Belarus - 2012».

He is an author and coauthor of more than 90 scientific publications, manuals for physicians, instructions and recommendations.