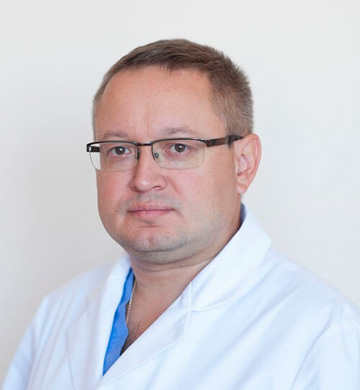 Assistant of the Department of Anesthesiology and Resuscitation

In 2000 Aleksandr Bogomolov graduated from Minsk Red Banner of Labour State Medical Institute with distinction. His specialty is General Medicine.

From 2000 to 2001 Aleksandr Bogomolov undertook an internship at Belarusian Scientific and Research Institute for Traumatology and Orthopedics as an anesthesiologist.

From 2001 to 2015 he worked as an anesthesiologist and intensivist at the Division of Intensive Care of the Republican Scientific and Practical Center for Traumatology and Orthopedics. He is a physician of the highest qualification category.

From 2004 to 2007 he did an extramural clinical residency course at the Department of Anesthesiology and Resuscitation of BelMAPE.

Since 2015 Aleksandr Bogomolov has been working at the Department of Anesthesiology and Resuscitation of BelMAPE as an assistant.

His main scientific interests are the following ones: peculiarities of anesthetic management during highly traumatic operations, correction of massive blood loss, laboratory and instrumental control over the procedure of anesthesia, issues of intensive therapy of critical conditions.

He is an author and coauthor of 43 scientific publications, including 1 teaching guide, 2 instructions of the Ministry of Health of the Republic of Belarus, 1 patent.

Last edit 2020-12-11 10:06:00
Our website uses anonymous data transmitted using cookies. 🍪 All your information is stored securely and is not shared with the third parties.