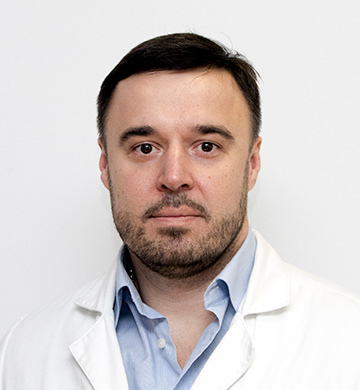 Associate professor of the Department of Maxillofacial Surgery of BelMAPE

Associate professor of the Department of Maxillofacial Surgery of BelMAPE, Candidate of Medical Sciences, maxillofacial surgeon of the first qualification category

In 2002, Dmitry Grichaniuk graduated from Grodno State Medical University with a specialty in General Medicine.

In 2004, he completed his internship and clinical residency course; in 2008, Dmitry Grichaniuk completed his PhD course at the Department of Maxillofacial Surgery of Belarusian Medical Academy of Postgraduate Education.

In 2006, 2008, 2009, he did internships in Italy in hospitals of the University of Bologna and Milan Medical University: «Congenital and acquired pathology of the maxillofacial area», «Orthognatic surgery».

In 2015, Dmitry Grichaniuk did internship in Belgium: «Dental implantation».

In 2015, he did internship at Burdenko National Scientific and Practical Center for Neurosurgery in Moscow: «Craniofacial surgery of congenital deformations of maxillofacial area».

Since 2013, Dmitry Grichaniuk has been a member of the charitable organization «Operation Smile», providing medical assistance as a maxillofacial surgeon.

Annually, he participates in international congresses, meetings and exhibitions on maxillofacial, reconstructive and aesthetic plastic surgery.

His main scientific interests are the following ones: