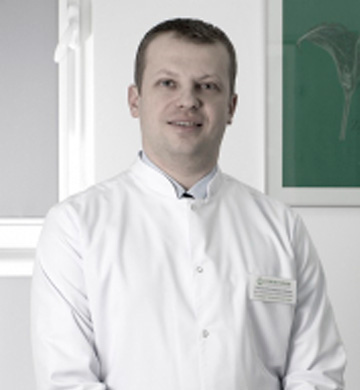 Maksim Luschik graduated from Minsk State Medical Institute with a specialty in general medicine in 2002.

From 2002 to 2004: anesthesiologist-intensivist at Minsk Clinical Oncology Dispensary.

From 2004 to 2007: PhD course at the Central Scientific and Research Laboratory of BelMAPE.

From 2007 to 2011: senior researcher of the thyroidology group at the Central Scientific and Research Laboratory of BelMAPE.

He did internships in endocrinology and radiation medicine at Nagasaki University (Japan), the University of Würzburg (Germany). Maksim Luschik took postgraduate courses on pediatric endocrinology at the European Association of Pediatric Endocrinologists in 2005 and 2013. He also did postgraduate courses on diabetology at the European Association for the Study of Diabetes Mellitus (2004, 2007, 2009, 2012, 2013, 2014).

Maksim Luschik conducts minimally invasive diagnostic manipulations in case of nodal thyroid pathology. He did retraining courses in anesthesiology and intensive care, ultrasound diagnostics, endocrinology. He has the first category.

Maksim Luschik participated in the organization and conduction of screenings of the population suffered from technological catastrophe at the Chernobyl nuclear power plant.

He has a lot of rewards and got the Reward of the President of the Republic of Belarus as a young scientist.

He is an author and coauthor of more than 100 publications, manual on endocrinology, 4 educational guides, 5 instructions for method, and 3 patents. He gave reports at the International Congress of Endocrinologists, Oncology Meeting taking place in the Republic of Belarus, international and republican conferences and seminars.

Maksim Luschik is an assigned person and director of scientific and research projects for the study of thyroid diseases and associated metabolic disorders, problems of overweight and obesity, malignant and nonmalignant nodular thyroid pathology.