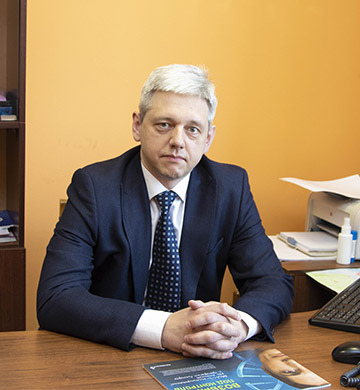 Mikhail Revtovich was born in Minsk.

From 2001 to 2004, he did PhD course at the Department of Surgical Diseases № 1 of Belarusian State Medical University. During his postgraduate studies, Mikhail Revtovich did retraining courses on the English language at Minsk State Linguistic University, Faculty of Foreign Languages. In 2004, he defended Candidate’s thesis entitled «Inhibitors of cytokine production and lipid peroxidation in the treatment of acute pancreatitis». After defending his thesis, he worked as an assistant at the Department of Surgical Diseases No. 1 of the Belarusian State Medical University within the period from 2004 to 2007.

Since March 2007, he worked as a senior researcher, and then as a leading researcher of the department of abdominal oncopathology at the Republican Scientific and Practical Center named after N.N. Aleksandrov. Since September 2020, he had been working as chief researcher at the laboratory of thoracic oncopathology. Since September 2015, he worked as a thoracic surgeon at the Oncology Department of Gastroesophageal Pathology of Alexandrov Scientific and Research Center for Oncology.

In 2010, he got the highest qualification category as an oncologist.

From 2009 to 2014, he did a course on international rules for conducting clinical trials (GCP) at the Center for Expertise and Testing in Healthcare of the Ministry of Health of the Republic of Belarus.

In 2012, Mikhail Revtovich completed an internship at the Department of Surgery and Oncology of Liverpool Royal Medical University at the Royal University Hospital in Liverpool (UK).

As part of the educational program of the European Society of Surgical Oncology, he completed an Advanced Course in the Management of Hyperthermic Intraperitoneal Chemotherapy (HIPEC) after Cytoreductive Surgery) (Germany, 2014), as well as a training course on 3D- laparoscopy (June 18-19, 2015, Hamburg, Germany).

He is an author and co-author of more than 290 scientific papers (including in a number of leading journals - European J. Surgical Oncology, J. Gastroinest. Oncology, Carbohydrate Polymers. Indian J. Surgical Oncology, etc.), 18 inventions, 8 rationalization proposals, 9 instructions for use approved by the Ministry of Health of the Republic of Belarus. He is one of the developers of the national clinical protocols "Algorithms for the diagnosis and treatment of malignant neoplasms" (2018). He is a co-author of chapters in the Guide to Oncology in 2 volumes, ed. O.G. Sukonko. - Minsk: “Belarusian encyclapedia ime Piatrusya Brouki”, 2016.

The main topics of scientific publications:

Last edit 2021-08-30 11:09:10
Our website uses anonymous data transmitted using cookies. 🍪 All your information is stored securely and is not shared with the third parties.