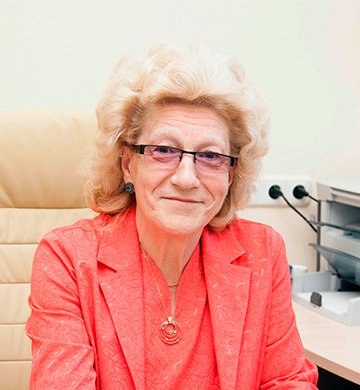 Head of the Department of Obstetrics, Gynecology and Reproductive Health of BelMAPE, obstetrician-gynecologist, Doctor of Medical Sciences, professor

Stanislava Mikhalevich was born in May, 1956, in the town of Nesvizh in a family of employees. From 1973 to 1979, she studied at Minsk State Medical Institute, Faculty of General Medicine. Then she did internship and, until 1989, she had been working at Minsk Regional Clinical Maternity Hospital.

In 1989, Stanislava Mikhalevich strated to work as an assistant at the Department of Obstetrics and Gynecology №2 of Belarusian State Institute for Advanced Medical Training.

In 1995, she defended Candidate’s thesis entitled “Intravenous laser irradiation of blood aiming at the prevention from purulent-inflammatory complications at caesarean section”.

In 2001, Stanislava Mikhalevich got the academic title of an associate professor.

In 2003, she defended Doctoral thesis entitled “Optimization of the diagnostic search and treatment of female infertility” and, in 2004, she got the academic title of Doctor of Medical Sciences.

Since January, 2005, Stanislava Mikhalevich had been working as professor of the Department of Obstetrics and Gynecology of BelMAPE.

Since November, 2008, she has been working as head of the Department of Obstetrics and Gynecology of BelMAPE.

Stanislava Mikhalevich got the first specialization in microsurgery in Moscow and she has been the first obstetrician-gynecologist, who can perform microsurgery operations. The acquired knowledge in microsurgery helped her to successfully cure patients’ infertility. Due to her efforts, a lot of women have been treated and got chance to have a baby.

Stalislava Mikhalevich mainly devotes her work to the following:

Her researches cover the most actual issues of obstetrics and gynecology. They are used in practical healthcare and help to improve the demographic situation in Belarus.