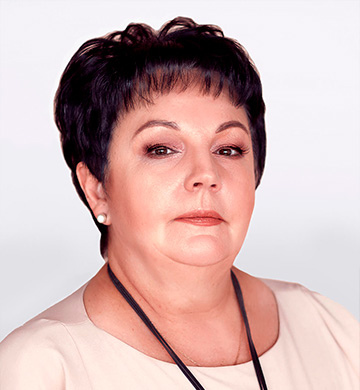 Tatiana Kalinina was born in the family of physicians in the town of Angarsk, Irkutsk region. In 1982, after graduation of Minsk State Medical University, she started PhD training course at D.I. Ivanovski Scientific and Research Institute for Virology (Moscow). In 1986, she successfully defended Candidate’s thesis in virology. From 1985 to 1986, she worked as a senior researcher at the Belarusian Scientific and Research Institute for Epidemiology and Microbiology.

From 1986 to 2000, Tatiana Kalinina was lecturer at the Department of Social Hygiene and Organization of Healthcare of Minsk State Medical Institute.

From 2000 to 1994, she worked as an associate professor at the Department of Public Health and Healthcare Management of the BelMAPE.

Since 2004 until the present, she has been working as a vice-rector for academic work at BelMAPE.

She is an author of 139 scientific works on the issues of healthcare organization, public health, continuing medical education, development of telemedicine technologies. Main topics of her scientific works: assessment of public health-related quality of life, analysis of medical population processes, mechanisms of morbidity and disability of Belarusian population, estimation of medical quality, rendering of medical and social care for adults.

Tatiana Kalinina has the highest qualification category in healthcare management.

She was awarded Honorary Certificates given by Board of Health (2006), Ministry of Education of the Republic of Belarus (2011), Republican Committee of Belarusian Healthcare Labor Union Organization (2012), State Educational Establishment "Belarusian Medical Academy of Postgraduate Education" (2009, 2014), also she was awarded Award Pin given by Belarusian Healthcare Labor Union Organization (2014).